Dancing In No Man’s Land

It’s a tactic that has worked since the beginning of war; label the enemy and attack.

Anyone with social media, a radio, or a television can clearly see that there is a war going on. Everyone is right, everyone needs to prove how right they are, and we all suffer.

Dancing In No Man’s Land by Brian Jennings is an incredible book that helps us to see how we can balance peace with truth. He takes Biblical scriptures of being kind, loving our neighbors (and enemies!), and being a light to the world to show that if something we want to say isn’t kind, helpful, or loving it doesn’t need to be said.

He shows examples in the Bible where Jesus showed righteous anger (table flipping, anyone?!), times when he rebuked with his own questions, times when he stayed silent.

But most of all, Jennings showed us how we’ve all become accustomed to picking sides and creating our own bunkers to throw our assaults from and how those who can meet in the middle (“no man’s land”) are the ones who can actually change the world. Throwing bombs across the trenches isn’t going to change anyone’s mind - it’s only going to make people defensive and hurt.

This book opened up my eyes on how to love like Jesus while still speaking His truths.

This book was given to me by Tyndale Publishers in exchange for my honest review.

Posted by Elizabeth at 4:13 PM No comments: 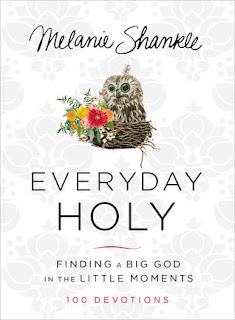 Everyday Holy by Melanie Shankle is like sitting down with a good friend and having an encouraging conversation. Shankle writes in a light hearted tone about deep (and not so deep) issues that I believe all women face.

In the introduction alone she states "And that is what you'll find in these pages - little pieces that point us to a big God." THAT is how I find God to be in my life - directing me little by little and letting my faith lead me to Him.

Shankle does not have a "holier than thou" attitude and does not talk down in this devotional. While it's chaptered into 100 devotionals I found myself reading it more as a book because I didn't want to stop!

This book was given to me by BookLook Bloggers in exchange for my honest review.

Posted by Elizabeth at 12:58 PM No comments: 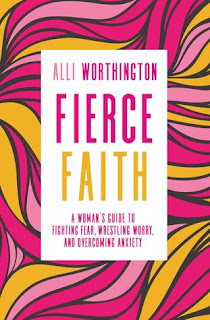 Alli Worthington hits the nail on the head in her newest book Fierce Faith when she points out that the Bible instructs us to FEAR NOT and the enemy is the one behind the lies, fears, and doubts that we tell ourselves.

The best part of this book is that Worthington doesn't just tell us how not to fear but she uses examples in her own life of when she let the fear win and how looking back she can see how she was deceived by lies.

From fear for our children, betrayal, failure, rejection, and more Worthington walks us through steps that we can take to and truths we can tell ourselves when faced with worry and anxiety. I related to so much in this book and like how it's woman to woman, not preaching or condemnation.

This book was given to me by BookLook Bloggers in exchange for my honest review.

Posted by Elizabeth at 8:23 PM No comments:

Courage for the Unknown Season 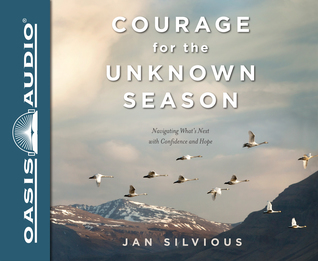 Isn't it funny how God works, and gives us His messages at the exact perfect time? I had been remarking to a friend that with my youngest turning 5 years old soon and my oldest a teen that I was embarking upon a new season of life and it just felt "strange". That very night I picked a book from the top of my "to read" pile and it was Courage for the Unknown Season by Jan Silvious. It was perfect reading material at the perfect time.

We all have seasons of life and sometimes it can be a little scary navigating the unknown, but this book shows us how to do it with confidence and hope. From just the unknowns to big life changes that we didn't ask for, Silvious shows us that God shines brightest during those times of turmoil.

I gleaned a lot of wisdom from this book and will be keeping it on my shelves (which you know is a high honor in this house - only the best stay!).

This book was given to me by Tyndale Publishing in exchange for my honest review.

Posted by Elizabeth at 2:05 PM No comments:

A Memory a Day for Moms 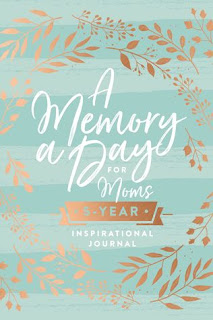 As someone who enjoys looking on Facebook "On This Day" to see funny things my kids said in the past, or see adventurous things we did, I love the idea of this journal. Answering the same question on the same day five years in a row lets us see how things change and what happened on particular days. Some examples of questions are "What is your child's favorite tv character" and "What has been a big encouragement to you lately?" I've had a lot of fun answering these questions and think this will be a treasure and keepsake as my children grow up!
This book was given to me by BookLook Bloggers in exchange for my honest review.

Posted by Elizabeth at 1:51 PM No comments:

All Things Bright and Strange 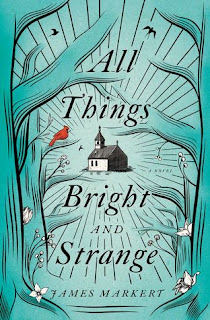 In the wake of World War I in the small, Southern town of Bellhaven, South Carolina, the town folk believe they’ve found a little slice of heaven in a mysterious chapel in the woods. But they soon realize that evil can come in the most beautiful of forms. All Things Bright and Strange by James Market

I love books that showcase the spiritual worlds of good vs. evil. This book started out strong but then introduced so many characters and story lines (that went no where) that it became hard to follow along. I saw so many opportunities where one of those stories could have branched out to become an interesting conclusion but the ending just felt rushed and fell flat. Actually, I still don't understand what the end was about and felt as though I had wasted my time reading the last half of the book.

This book was given to me by BookLook Bloggers in exchange for my honest opinion.

Posted by Elizabeth at 1:23 PM No comments:

The Air I Breathe

"We're created to worship. That's why you and I are going to spend our lives declaring the worth of something. As a result we've got to make sure the thing we declare to be of greatest value is really worthy in the long run." The Air I Breathe by Louie Giglio (page 21)

This book is a short quick read but makes you think about how you show your love for God. Or even if you are showing it. Every day our love for our creator should be apparent in how we live. It's not a new concept but it's a reminder we all need from time to time.

This book was given to me by Blogging for Books in exchange for my honest review.

Posted by Elizabeth at 3:14 PM No comments:

Elizabeth
Midwest, United States
I am a 32 year old stay-at-home mama. I've been married to hubby, Ben, for 14 years. We have 11 year old Rebecca, 9 year old Jacob in Heaven, 7 year old Joseph, and 2 year old Amy. We homeschool. Jacob was diagnosed with cancer in 2010 and relapsed in spring of 2012. He relapsed again in January of 2013 and after a drug trial and at home care Jacob passed away in August of 2013. We are battling our way out of the trenches after losing our dear son. Feel free to CONTACT ME at babys_mama1@yahoo.com

Copy this code to your website to display this banner!

Promote Your Page Too